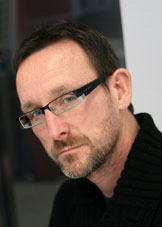 The mythos of any community is the bearer of something which exceeds its own frontiers; it is the bearer of other possible worldsIt is in this horizon of the possible that we discover the universal dimensions of symbolic and poetic language.
- Paul Ricoeur

This website traces the evolution of my Ph.D. on apocalyptic narratives.

You can read the original proposal here but like most Ph.D.'s it has evolved a fair bit since the early days of that proposal.

This site is the living, evolving doumentation of my thought.

It is presented publicly and in hypertext form as an expression of my hopes for the evolving form of the public/academic commons and my belief in the power of networked nodes of knowledge.

As such I welcome comment and feedback. Join in the conversation: email me.

I'm an academic and journalist, currently a lecturer in journalism in the School of Creative Writing and Journalism at the University of Wollongong

I was editor of Sydney Star Observer, Australia's oldest and largest circulation gay and lesbian weekly newspaper from 1999 until early 2006. Prior to that I worked primarily in magazines doing a range of arts journalism.

I'm doing my Ph.D at the University of Technology Sydney, where I previously taught part-time in the journalism program.

My main research interests are:

For more on my teaching and research visit marcusodonnell.com

This site is best viewed in Firefox or another web-standards compliant browser. Give IE the flick.